I must admit, I wasn’t into dogs. I grew up with dogs but I wasn’t really the main caretaker. I saw stray dogs here and there in my hometown, but they were just there. I didn’t notice them. I didn't pay attention to them. Sure, I saw them but I dodged them because of the fear of getting bitten and worse, contracting rabies. I didn’t take a second look at them and I didn’t feel sorry for them. It was just a few years ago that I got into dogs. Remember My Ganni Bear?

Since owning dogs, especially Golden Retriever, I realized how ignorant most Filipinos are when it comes to dogs. How many times I experienced shrieking, complaining, shouting to get my dogs out of there way because they are so big and they might bite them or their children. Gosh, I could just punch them in the face. I even got shouting match once with one of my neighbors because, while I was walking my dogs, Stark barked so loudly because of a cat and ,if you know Golden Retriever’s bark, you’ll understand how deep and loud their barks are. He shouted in Illonggo to get them out of the way because he is scared. Kalalaling tao tapos takot? I said : What an ignorant fool, they are freaking Golden retrievers! They don’t bite! I said: You dare shout at me because I’m a woman? You demeaning, uneducated fool. Go back to where you came from. (Well, I didn't say it like that but almost like that.)  So, a few steps after, he saw that children were petting my dogs. Eat that, you ignoramus fool! I have so many stories like that. BUT, on the other hand, people fear to get near my house because of my dogs, so I think it is working out just fine to ward of burglars.

I’ve met and became friendly with a stray dog. I named him Tiger Woods because of his spots. Around that time I met him, I also became friendly with another dog, the neighborhood kids called him Kevin. Kevin was a rambunctious dog, barking at night or chasing trisikad and flipping all the trash can while Tygz (Tiger Woods, pronounced as "taiygz") was a quiet dog. He would just stay under the cars and trucks just outside his human’s house but his human seemed to not pay attention to him. Kevin and Tygz were best friends. They would run around the basketball court just in front of my house and I saw them every day. I became their regular feeder. Until one day, Kevin disappeared. I searched for him and I found out that he was picked up by the city pound. I looked for him but I couldn’t find him so I let him go. I cried and prayed for him. Tygz, on the other hand, always dodged the city pound and I commend him for that. I said, maybe because he's an introvert and he always stay below cars and came out when he heard my gate opening (which I purposely made so he’d hear) We became friends, I get to hold him. I even planned on adopting him but he always escaped.

I guess he wanted freedom so I let him be.

He had lost so much weight this past few weeks and he had been going to my house less and less. Three days ago, I saw him limping and I thought he got run over by a car or something. I checked closely and he couldn't stand because he was so thin. He was malnourished. I rushed him to the vet and the vet said he had cancer. Yesterday, I took him in. He went out to pee and poo and just got back in. Oh he was struggling to get up and my heart broke into pieces! I fed him and give him water and made him comfortable. I didn't know it was his last day. 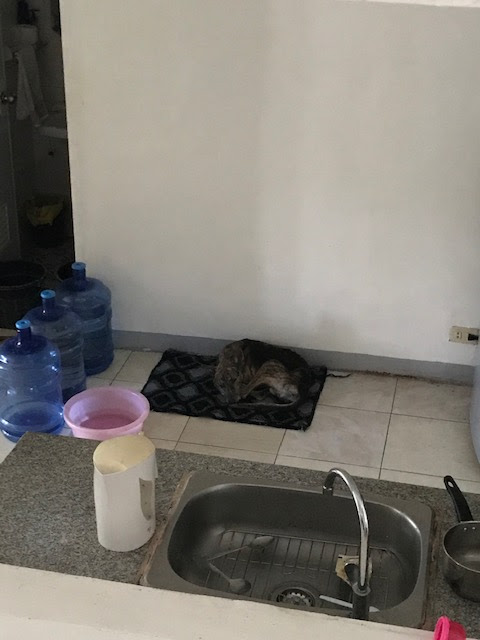 Yesterday, at around 9 PM. He passed away. I got to say goodbye to him. I saw him took his last breath and I said: Your suffering has ended, Tygz. Be at rest now. Please say hi to Pepper for me.

My heart ached for Tygz, but I know that he is at a better place now. He is playing with Pepper and Ganni and he is happy. I also felt at peace knowing that I gave him a comfortable last day.

Remember it took me a while to come near you? It took you a while to warm up to me but I never gave up? It was worth it. The day I cut off the tight collar wrapped around your neck was the day we became best friends. You were invisible to other people, but I saw you. Thanks for being our walking buddy. You walked with us so many times. I still find myself looking at under the cars for you but I know you are at a better place now. Maayong pag biahe, Tygz. You are never invisible to me. Thanks for almost five years of friendship. May we meet again someday when my time comes.
Posted by Maria Abellanosa at 2:43 AM

I'd love to hear from you. I read and appreciate all comments. :)